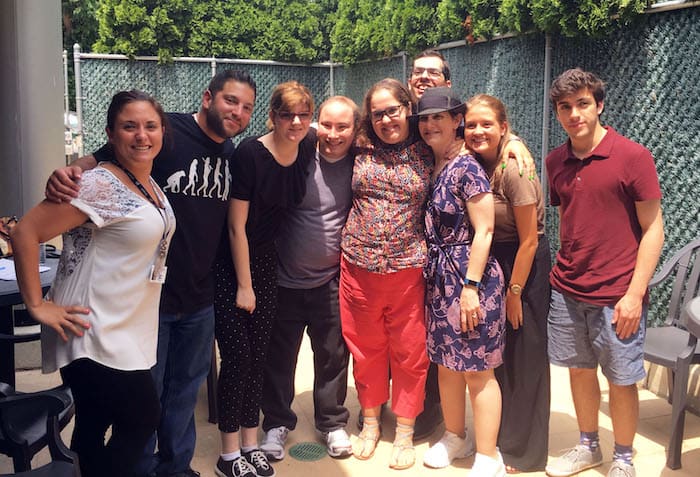 For seniors at Long Island’s Sid Jacobson Jewish Community Center, it was a morning full of reminiscing. Old standards, movie-musicals and folk songs inspired animated conversation and even brought back some fond memories. But what made this morning even more special were the facilitators of the MUSIC & MEMORY® program: five young adults from the JCC’s Special Needs Department. Alex, Stephen, Bridget, Jackie and Christie helped reveal the musical tastes and old favorites to build the basis for the seniors’ personalized playlists.

Located in East Hills, N.Y., Sid Jacobson JCC offers programs for a wide range of participants. The Adult Day Programs are designed to promote social and physical stimulation for all ages and stages of dementia and other conditions. The JCC’s Music & Memory program, sponsored by Goidel Law Group, has seen impressive results.

“We’ve been certified for the past year, and so far we’ve had an amazing response,” Music & Memory Program Coordinator Joe Wasserman, MSW, said. “In fact, one gentleman with expressive aphasia, who struggles to get his words out, was able to sing an entire song. This brought his wife to tears, and she called the JCC to thank us.”

After being awarded an internal grant to expand the creative arts programming in their Adult Day Programs and Special Needs Departments, staff decided to team up to facilitate this special joint initiative. The young adults with special needs acted as “music detectives” to discover the seniors’ musical tastes, which is an important first step in the Music & Memory process. “We knew that they possessed the skills needed to interview the seniors effectively,” Joe said.

Before interviewing the Adult Day Program participants, the young adults took part in an interactive training led by Joe along with Taylor Herbert, LCSW, Director of Specialized Senior Services. The training helped them gain an understanding of dementia and communication strategies, as well as the benefits of a customized iPod playlist.

The group learned how personalized music can tap into long-term memories and improve quality of life. To prepare for interviewing the seniors, the young adults role-played with each other to practice effective communication skills, including speaking clearly and slowly, using eye contact and validating responses by repeating and reframing answers. They also learned how to interpret responses to music—reading verbal and non-verbal reactions, such as laughing, looking up or smiling, that indicate a positive response to music.

Soon it was time to put the newly acquired information to good use by meeting and interviewing the seniors. After brief introductions, Joe played a variety of songs, from classical to early Rock & Roll, on the piano. The young adults noted the seniors’ verbal and non-verbal cues. They saw firsthand how the right music can breathe “new life” into someone, previously quiet and introverted, who began clapping, singing along or even dancing.

Next, the young adults used Music & Memory questionnaires to gather more detailed information from the seniors. They asked questions such as, “Where did you grow up?” and “Who was your favorite performer or band?” Before long, Alex, Stephen, Bridget, Jackie and Christie had the seniors engaged and bolstered by music and conversation. Some of the seniors who struggled with language came out of their shells and opened up to the young adults. The room was filled with a palpable, undeniable magic.

Afterward, the group was eager to discuss the songs and stories they had heard. “All I had to do was mention the word ‘musicals’ and a flood of different songs and musicals came out,” Alex said. “It was awesome! These were the most engaged Broadway musical people I’ve ever seen!” Everyone enjoyed watching the seniors’ reactions to live music, as well. “I thought it was interesting,” Christie shared. “People were singing, clapping and bobbing their heads and dancing when the music was playing.”

Working with the seniors was an effective confidence- and skill-building activity for the young adults. “This model encapsulates improved self-esteem and self-determination for those with differing abilities,” Robin Lombardo, Music & Memory’s Northeast Regional Director, said. Bonding over music also creates an intergenerational activity that forges connections between young and old. “It really provides an enjoyable moment of music sharing and story collaboration,” Robin added.

Alex, Stephen, Bridget, Jackie and Christie agree. When asked if they’d want to work with the seniors again sometime, the group gave an enthusiastic, resounding, “Yes!”

“I loved it. It was awesome,” said Jackie. “I loved listening to people and helping them out.”