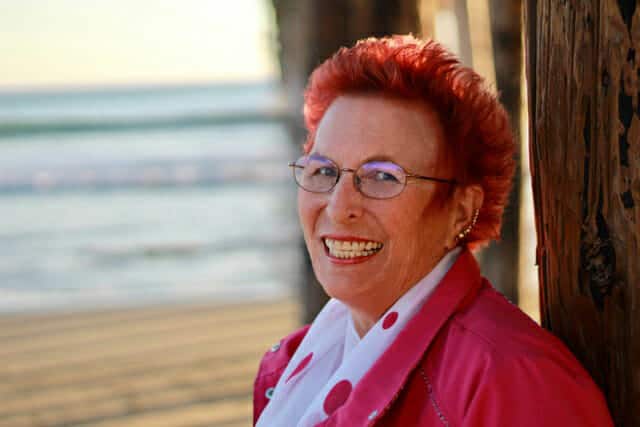 Inspired by the power of personalized music, Anne Brazil has decided to include Music & Memory in her will.

Anne Brazil was surfing Netflix one day when she discovered a video that moved her so profoundly, she had to act. The video was Alive Inside: A Story of Music and Memory.

“I admire how Dan Cohen has not only improved the quality of life of many lonely souls, but literally sparked their long-lost vitality,” says Anne. “He takes a simple iPod loaded with music to a nursing home, places the headphones on the patient, and something magic happens. No pills, no shots, no surgery, nothing invasive, just a simple, loving gift of music, and the person is miraculously changed. Eyes pop open, a smile appears, hands wave and toes tap.”

For this former music teacher with a Master of Social Work, the concept was captivating. “What can I do to support this remarkable program?” she wondered.

A Bequest for MUSIC & MEMORY®

Anne mailed a check to Music & Memory, asking only that it be used however her donation could make the greatest impact. In response, she received a personal thank you card from Dan. “He didn’t flood my email with pleas for more, and he didn’t stuff my snail mail box, either,” she says. “This program is a cut above.” As she learned more about the organization’s efforts to spread the power of personalized music, Anne considered dedicating a portion of her estate to Music & Memory.

“For years I was just a teacher on a salary with a kid,” she explains, as she scans the Pacific Ocean from her home in Cayucos, a small fishing village about two hours north of Santa Barbara. ““I squirreled away every refund, every bonus, every royalty. When I had saved enough, I picked up another house or apartment. Soon I traded up to larger properties to build my holdings. Finally, I was able to take the leap to California’s beautiful central coast. I’m really blessed.”

Sharing the Healing Power of Music

A California native who grew up on a farm, Anne first learned to play the clarinet in school and later, many other instruments. (Her musical favorites include Gregorian chants, Mozart, Leonard Cohen, the Three Tenors, the Pentatonix, and Rock ‘n Roll.) After earning a degree in music, she taught beginning instruments, then branched out to vocal and instrumental instruction at all school levels over her 40-year career.

“Music changed my brain, too,” she says. “It repaired the broken synapses of words and reading. It led me out of the shame of dyslexia. I was able to achieve success academically and professionally, thanks to the healing power of music.”

World travels included teaching gigs in Japan, Germany and Portugal. In midlife, when a teaching promotion fell through, Anne decided to broaden her professional credentials and went back to university to earn a Master of Social Work: “I didn’t change careers after all, but relocated from farm country to the beach, to share my music with little surfers and sun worshippers.”

Time to Give Back

Now retired and enjoying the fruits of her careful saving and investments, Anne decided it was time to give back. “I’m a senior citizen myself,” she says. “I’m fortunate to have the means to last my remaining years. All my needs are met and almost all my wishes. It was time to put my desires on paper.” In the process of drafting her will, she decided to include Music & Memory as a beneficiary.

“My quality of life is ample,” she says. “But I realized there are some older people who are really suffering. They’re locked inside themselves. If we can give someone another year or even a month of fun, we should do it—with a smile and a laugh and love!

“I’m leaving this world with empty hands, anyway, so why not endow a portion of my estate to Music & Memory, where it will help to restore vigor to so many? We are here to help each other. That is my purpose.” 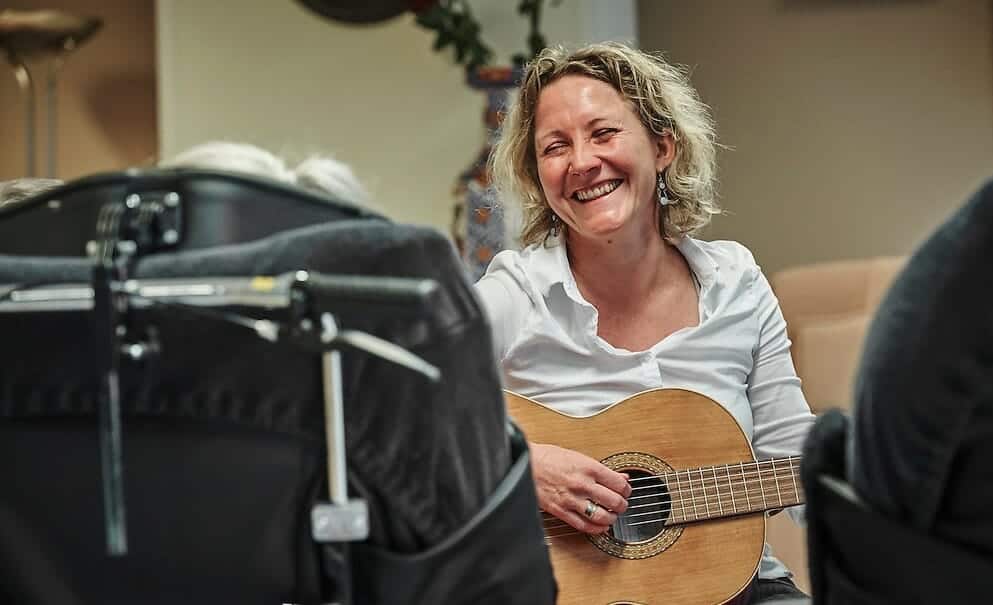 It all began in 2008 as an experiment with a handful of residents in four New York nursing homes. In the ten years since, MUSIC & MEMORY® has brought the power of personalized music to every state in the U.S., as well as Canada, Australia, Europe, the Caribbean, Israel and South Africa. And pilot programs are underway in Japan.

Shepherding Music & Memory’s international expansion is Manon Bruinsma, a music therapist based in the Netherlands, who first heard of the program when she viewed the Henry video online. “People kept sending it to me and telling me this is going to be your thing!” she says. “It struck me like lightening.”

That was just the beginning of what has become a passionate life’s journey to bring the benefits of personalized music to her home country, as well as the rest of Europe and beyond.

Launching International Expansion from the Netherlands

Manon’s first step was to contact Executive Director Dan Cohen, who put her in touch with another Dutch music therapist. Together, they took Music & Memory’s training and began to set up personalized playlists for some of their clients—and learned a few lessons. “I thought the headphones would be isolating,” she says. “And I thought people who were musical all their lives would respond the most positively, while people who had no musical involvement would not.” Both assumptions proved to be false.

Intrigued by how Music & Memory was improving quality of life in nursing homes where she worked, Manon volunteered to field questions about the program from people outside the U.S. She also continued to advance the use of personalized playlists at nursing homes in the Netherlands. Then, in April 2015, she traveled to New York City to meet with Dan and formalize the founding of Music & Memory in the Netherlands; in addition, Dan asked Manon to direct the organization’s European outreach efforts.

That role has vastly expanded to encompass the rest of Europe and Quebec. Today, there are 48 MUSIC & MEMORY® Certified Care Organizations in the Netherlands, including two on the Dutch Caribbean island of Curaçao. Manon has also helped to train care professionals in Quebec, the United Kingdom, Germany and Switzerland—she speaks Dutch, English, German and French.

Through other partnerships, there are more than a hundred MUSIC & MEMORY® Certified Care Organizations throughout Australia and nearly 300 in Canada. And the inquiries keep coming—from Hungary, Denmark, Sweden, Austria, France, Italy, Poland, Portugal, Spain and Argentina. Research about the benefits and impact of personalized music is underway at universities in the Netherlands, Germany and Poland.

Cross Cultural Differences and Similarities in Caring for Elders

Keeping on top of it all is certainly a challenge. Manon travels across Europe to bring in-person training to new countries—first testing out translated materials and adjusting for cultural nuances in one key nursing home before expanding online training to other care communities in that country. “I feel like I have to scale up on a monthly basis,” she says. “But it’s hugely rewarding. When nursing homes at the forefront of dementia care adopt the program, it spreads from there.”

The experience has highlighted cross-cultural similarities in elder care, as well as some striking differences. Budgets are being cut everywhere, Manon observes. High staff turnover is a persistent challenge, in part, she believes, because many countries are trying to keep people at home longer. By the time they are placed in a nursing home, they are much sicker, creating more stress for staff.

But, she adds, quality of care differs greatly from country to country, depending on tax revenues and the degree to which each government is involved in running the homes. In the Netherlands, for example, almost all nursing homes are publicly owned; compulsory public long-term-care insurance supports a high standard of care. In the U.K., by comparison, 70 percent of the homes are private. France requires families to be involved in their family member’s care, including bringing food, to get a placement.

Emphasis on Keeping People at Home as Long as Possible

Across Europe, she sees a trend toward favoring home care over nursing homes. As Music & Memory develops new training for home care agencies here in the U.S., the demand for parallel training for European countries, as well as family caregivers, will undoubtedly increase.

Manon’s big dream, to help meet the need, is to partner wealthier Northern European countries with Southern European countries that have fewer resources. “I had a call from someone in Hungary who wants to get Music & Memory running in their town, but its too expensive,” she says. “I would love to get a country like Denmark or Sweden to be their sponsor.”

Whatever the hurdles, Manon finds the work of Music & Memory’s international expansion to be deeply rewarding. “The greatest thing is always getting a video or picture about how well it works, how it’s changing lives of so many people,” she says. “The way that people respond to music is universal. People ask me if I miss the one-on-one contact as a music therapist, but every time I hear a story that this worked, it’s worth it. Music & Memory has widened my world.”