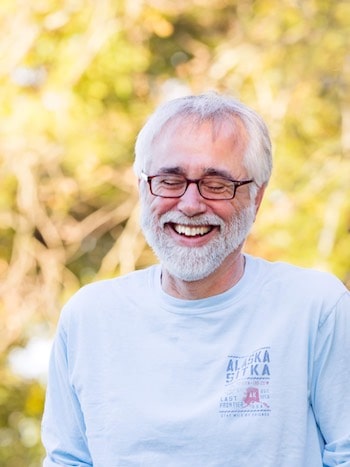 Brian LeBlanc says that his favorite music helps to lift the fog of Alzheimer’s.

Immersed in fog. That’s how Brian LeBlanc describes his bouts of confusion from Alzheimer’s.

“Imagine you’re driving down a road on a beautiful fall day,” he says. “The sun is shining, the trees are orange and purple. You come to a bend in the road and, all of a sudden, you hit a fog bank. Your natural reaction is to slow down, creep along. I can be doing anything, and all of a sudden this fog comes in and takes over my brain. I can still see, but I can’t make sense of it all.”

Diagnosed five years ago at 54, Brian says these episodes can happen without warning, five or ten times a day, for long or short periods. But he’s found a powerful antidote: his favorite music. Listening to his personalized playlist, he says, “My fog has diminished by 75 percent. It’s euphoric.”

Sharing a Love of Music

Music has always played a huge role in Brian’s life, since his childhood growing up in New Orleans. His mother would play her favorite Broadway show tunes every Saturday while she cleaned. His father loved to blast Tchaikovsky’s 1812 Overture. “He knew exactly where to place the needle on the record where the cannons go off, “ recalls Brian. “Always at 7:30 on Saturday morning, with the volume way up. It would make my older brothers mad, but he thought it was so funny.”

Singing for churches since he was a teen, playing guitar, and now singing with the group Dr. Breeze for senior care community residents, Brian loves to see how familiar songs bring listeners to life: “After about two or three songs, you’ll see a foot start to tap on the floor, then a hand tap on the arm of a chair. Then the head comes up, eyes open, and they start singing. It’s the most beautiful, wonderful thing I’ve ever seen.”

But it never occurred to Brian to create his own personalized playlist until he heard Music & Memory’s Deborah Ferris, Southeast Regional Director, present at an Alzheimer’s symposium in Pensacola, Fla., where he now lives. His epiphany is summed up by a framed quote on his wall, attributed to trumpeter Al Hirt: “ Music—it’s not what I do, it’s who I am.”

Once Brian started creating a playlist of favorites, he couldn’t stop. His eclectic list of about 500 songs includes Fleetwood Mac, Kenny Rogers, Queen, Herb Alpert and the Tijuana Brass, and Broadway musicals, as well as Pete Fountain, Al Hirt, the Neville Brothers and other New Orleans jazz greats. And, of course, the 1812 Overture. “Listening to my mom’s and dad’s music brings me back to my childhood. Such wonderful, wonderful memories. I can sit here for hours and get lost in the music,” he says.

It’s difficult for Brian to recall lyrics. But as soon as he hears the recording, he can sing along easily: “The lyrics appear in my head like a scrolling text. I’ll be singing with songs I haven’t listened to in twenty years, and the words are as clear as day.”

Since he never knows when the fog will cloud his mind, Brian uses voice-activated devices and timers to play a certain song at a particular time during the day. When he hears the music, the fog clears. A more difficult challenge is remembering to start his playlist if the fog descends. Although he lives alone, Brian maintains a close friendship with his ex-wife, Shannon, who helps him to keep track of appointments and will check up on him if he’s not active online by 9:00 a.m. “Shannon helps me make decisions to be sure I’m doing the right thing,” he says. “She doesn’t let anyone take advantage of me.”

Using Alzheimer’s Experience to Help Others

Listening to his favorite music also helps Brian to stay positive. He well knows how Alzheimer’s can progress. The disease runs in his family, going back to his great-great grandmother. “Back then, they called it hardening of the arteries,” he says. Brian’s grandfather, whose house backed up to his parents’ home in New Orleans, had Alzheimer’s, as well. As the disease progressed, his grandfather would rise at 3:00 a.m., kiss his wife goodbye and say he was going to work. Since she was a paraplegic, her solution was to call young Brian and say, “He’s gone again.” Brian would get in his car and search before waking his parents, if his grandfather couldn’t be found. “We became very good friends with the police,” he adds.

Brian’s mother, too, developed Alzheimer’s in her late ‘70s. “My sister would ask her to help set the table, because she always wanted to help,” he recalls. “She would get a pot out and set it on the table, or a can opener. She didn’t know what a napkin was, but needed to put something in its place.” Brian’s mother died at 85, just 2 ½ months after he was diagnosed—although he never told her. His father also died of dementia-related disease.

That family history would be enough to devastate many people. But Brian’s response is to speak at conferences, large and small, about what it’s like to live with Alzheimer’s. A former public relations and marketing professional, he has always enjoyed personal interactions and “being in the public eye.” Even with that experience, however, he used to wonder why he would get standing ovations after his presentations: “Are they standing up for me because they feel sorry for me? Or because there’s a guy with Alzheimer’s and he can still make sense? Or can they really appreciate and understand my message? It took me a long time to accept that fact.”

Much as he wishes he didn’t have Alzheimer’s, Brian feels that speaking about his experience is now his mission in life: “This is why I was put on this earth, to do what I do. I tell them I’m living well as best I can, even as I still have my bad days. They give me hugs, thank me, tell me I helped them realize what their relative was going through but couldn’t express. They send me all these beautiful, wonderful messages. It’s life changing.”

Promoting the Power of Personal Music

One of Brian’s top favorites is from the first movie musical he ever saw, “Climb Every Mountain” from The Sound of Music. “It’s always been a favorite, and now it has a special meaning. Now every day I do climb a mountain to follow my dream,” he says. “My advice, not just for people with cognitive disabilities, but for anyone, is to make a playlist. Take the music you grew up with, the music you listen to now that gives you peace and calmness.

“When you’re sad or depressed, if you’ve lost your loved one, put on a song that was your favorite with that person. You’ll cry, but then your tears will turn to the joy you had with them. If you have cognitive issues, even if you listen for five, ten minutes, the music will give you that clarity—where all of a sudden, you’re in another world where there is no Alzheimer’s, no dementia. You’re in this space where all you have are beautiful, wonderful, funny memories.”