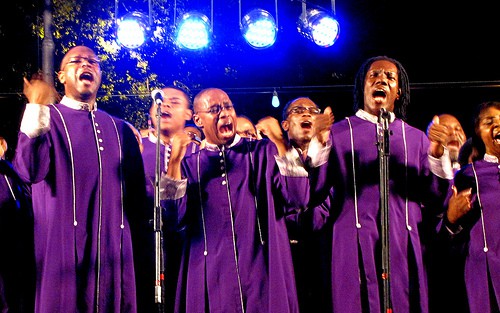 Bent over her wheelchair, eyes closed, Ella would all-too-easily melt into the background of the dining hall at the Orzac Center for Extended Care and Rehabilitation. Legally blind, with dementia, she sat quietly, a solitary figure who rarely, if ever, spoke.

All that began to change in 2012 when Music & Memory came to the Orzac, a 120-bed facility on the grounds of Franklin Hospital in Valley Stream, N.Y., part of the North Shore-LIJ Health System.

“Ella loved gospel, reggae and music from the ‘50s and ‘60s,” recalls Chris Corallo, a music therapist who introduced the personalized music program to Orzac residents. “She’d sing along, waving her head back and forth, just like Henry in the video.”

A Gradual Reawakening Through Gospel Music

Ella’s awakening didn’t happen immediately. The first time Chris tried to play gospel music for her on an iPod, it took 50 minutes for Ella to respond at all. Gradually, however, as she recognized the songs, she began to sit more upright in her wheelchair. Soon she began to sway her head from side to side and sing to songs she knew.

“When I removed her iPod after about an hour-and-a-half, she thanked me for giving her the music,” Chris says. “I asked her a few questions, such as, ‘What did the music remind you of?’”

“I remember my mom and dad, when we went to church when I was little,” said Ella.

“Yes! When I listen to music, it makes me dance in my head,” she answered. “It makes me see.” As she spoke, Ella’s eyes opened wide and she smiled broadly.

Encouraged, Chris continued to bring the iPod to Ella at least three times a week. With repetition, her reaction time lessened: after about three weeks, 40 minutes; after 5 weeks, 20 minutes; by six weeks, it took Ella only 10 minutes to respond, singing and swaying to her favorites.

Chris, who loves “playing guitar, hopping and singing” with residents, brought Ella into her music therapy groups, where the octogenarian became an active participant. She would sing along to all the music, shake her hand-held rhythm instrument, and even talk to other residents–something she had never done before.

Ella’s experience, though remarkable, is not unique. Chris says the iPods have helped other residents with dementia to become more engaged, as well, with time and repeated exposure to their musical favorites. “One by one, I’d sit with them, watch their reactions as they listened, write notes,” she says.

It would take, on average, three sessions a week for two to three weeks, 40 to 50 minutes each session, for the residents to realize there was music in the headphones. But, like Ella, gradually they would respond more readily. Chris integrated these thrice-weekly, two-hour sessions with live music groups.

“By the time we got to the live music, they all participated voluntarily,” she adds. “They became more cognitively aware, more social, more cohesive with their aides.”

Chris has also introduced iPods to short term patients, using generic playlists of different popular genres, such as Big Band music or hits from the ‘50s and ’60s. “I’ll play a tune on my guitar to see what they like,” she says. Short-term patients sign an agreement to replace the iPod if it is lost and are typically able to use the devices on their own with some basic instruction.

“Their reactions are always positive,” she says. “Many say the iPods help them sleep, they are more relaxed, and, in turn, more willing to participate in recreation activities. The iPod therapy, as part of our recreational and music therapy at the Orzac, is integral to the healing process for short term patients.”

Ella died on January 17, 2014. Chris has no doubt that listening to favorite gospel music made her final years at the Orzac more humane, meaningful and fulfilling. “I’ll miss her,” says Chris. “I could make her laugh.